What is anti-seize technology?
In a nutshell, anti-seize refers to a solution that is normally applied to fasteners before fastening them. The product often comes in the form of a solution which is then applied to the threads of the fastener before fastening. There are more modern methods of applying the anti-seize, which usually involves dipping them in the solution for some time and then taking them out. This has the effect of reducing the amount of time it takes to do the application, as using a brush often takes longer. It also ensures a more regular spread of the solution. 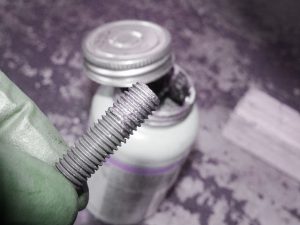 What does it do?

The solution is usually made out of a solution that has small flakes of metal in it. The general goal of putting the solution on fasteners is to reduce the risk of seizing and corrosion when you are installing them, removing them or when they are in place. During installation, the solution acts as a lubricant to reduce friction. After the fastener is in place, the liquid within the solution evaporates, leaving the solids behind. The solids usually have a low coefficient of friction, which then reduces friction between the fastener and the item you are putting together. This makes it easier for you to undo it without having to use a lot of force or to damage the fastener or the object you are removing it from.

What are the major benefits of using anti-seize?

The use of anti-seize first reduces the risk of corrosion. This is mostly due to the fact that the liquid used usually coats the fasteners against destruction by water and oxygen. In addition to that, the reduction of friction between the fastener and the item you are putting together will also reduce loss. This is because you will not have to use too much force to either install or remove the fastener. This is usually the main reason why the fastener or the item you are fastening become damaged. Also connected to this is the fact that you will not have to use destructive forces to remove the fastener. These usually include drilling through a fastener that has seized due to corrosion.
The use of anti-seize usually makes a lot of sense when doing fastening in an environment where the risk of corrosion is very high, but it can be used practically anywhere. The next time you are commissioning a project where you are likely to use a large number of fasteners, you should remember the benefits of using this technology.