Rusting of iron is the most common example of galvanic corrosion, in which the core steel of the iron sheet is attacked and the protective coating of zinc is destroyed.  Zinc being less noble is susceptible to the galvanic attack and once fully exterminated; it can cause the base metal to corrode very quickly. On the other hand, tin being more noble than the core steel makes it harder to break, but when it does, the underlying steel suffers the worst.

The mechanism behind galvanic corrosion 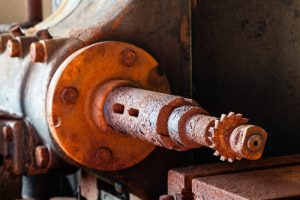 The process of galvanic corrosion is only possible when two different metals and alloys having different electrode potentials come in contact with each other. The less noble metals form the anode, while nobler metals take the cathode position. The difference in electrode potential accelerates the attack on the anode, which later gets dissolved into an electrolyte and deposits are collected on the cathode, which in this case, is a metal.
The electrolytes trigger the migration of ion from the anode to the cathode, which causes the anode metal to corrode quickly while inhibiting the effect of corrosion on the cathode metal.  Availability of electrolyte ensures that the ions keep migrating in order to allow the galvanic corrosion to take place.
Even though it’s not a desirable process, it has a few applications. In primary batteries, carbon-zinc cells are intentionally provided to facilitate the preferential corrosion of zinc which produces electrical voltage.  Another application is the preservation of buried structures by cathodic method, in which the anode materials undergoes corrosion to inhibit the corroding effect on the cathode metal.

How to prevent galvanic corrosion