If you run a project where you intend to use a large number of fasteners such as aluminum hex head cap screws and nylon socket head cap screws on a regular basis, it’s usually imperative that you come up with a planned system for managing their use. Otherwise, you will end up with problems including high expenses on account of fastener misuse. You may also note some problems with supply of the fasteners, such as when you order much fewer quantities than you should have.

Coming up with an inventory system is usually one of the trickiest parts of the project. However, there are many ways to solve this problem, and one of them is through the use of a vendor managed inventory. In such systems, the problem of organizing and running the inventory is left to the vendor.
The fact that almost 85% of fastener use in the country can be attributed to inventory overheads means that by controlling and optimizing it, you can drastically reduce the cost of any project. In a vendor managed inventory system, you are likely to save a lot of money and also reduce the risk of other problems such as shortages. Some of the benefits of the system include: 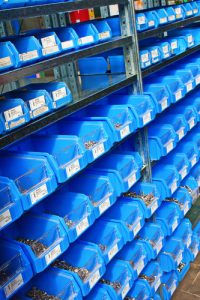 Inventory of fasteners often involves a lot of documentation. This is something that many vendors have heavily invested in in order to have it streamlined. As a result, when you use vendor managed inventory systems, you are less likely to have problems such as data entry errors and ordering errors. Most of the vendor managed inventory out there make use of automated systems in order to increase speed and reduce such errors.

Problems such as limitation of space among other issues means that for large scale projects, correctly timing the purchase of inputs such as fasteners is critical. With vendor managed inventory systems, the purchase orders are usually automatically generated. This is usually based on a predetermined variable such as time or the number of remaining fasteners. This way, you can be sure that the supply of fasteners will always be there, without forcing you to spend a lot of money on them and have problems in storing them. It is the ultimate way of keeping any production line running.

A reduction of stock on hand

Having too many fasteners in storage can seem like a good idea, but in many cases it’s discouraged. When you have too many of them lying around, you will need more space to store them and this will lead to increased costs. For a time limited project, ending up with too much surplus fasteners can also represent a loss, since you will have to find a way to get rid of them if you don’t need them. Using a vendor managed inventory ensures that your stock on hand will be as little as possible, since the system takes care of the planning and purchasing.
The fact that you get all these factors and more, combined with the fact that you don’t have to worry about the technical details involved makes vendor managed inventory systems some of the best you can subscribe to.