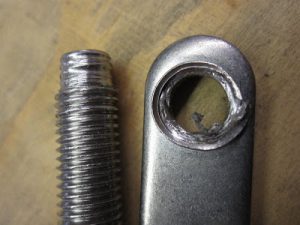 When you plan to use fasteners such as alloy 20 cap nuts in large quantities, it is often necessary to anticipate the various ways in which they can fail and then plan for such failures. Being specific is important, since it will help you come up with plans that will actually work. A major incentive for preventing such failure is the fact that in case of failure, the project is likely to take much longer, and you are likely to spend more on it as well. When using the fasteners for product assembly, such failure could also lead to lower quality.

If you are going to use threaded fasteners such as Monel 500 hex lag bolts, one of the types of failure you need to plan for is thread galling. This can be a common and frustrating problem particularly if you use low quality fasteners.


What is thread galling?
Thread galling, also known as seizing, is the regular abrasion of the threads of a fastener over time. It most commonly occurs in fasteners that are likely to be subjected to a lot of motion, such as those that are meant to be fastened and undone regularly, or those that are subjected to regular vibration. However, there are times when the galling can occur during the initial fastening as well. If you intend to use threaded fasteners, it’s important to not only identify galling when it occurs, but to also put in place measures to ensure that it does not occur in the first place.
Ways to minimize galling
One of the most important ways of preventing galling is by making sure that the fasteners are properly manufactured. Insisting on buying yours from a manufacturer you can trust is therefore very good insurance against this problem. In addition to that, coating the fastener prior to use has been found to reduce galling. This acts to reduce contact between metals, which might result in excessive friction and eventual wearing out. Some of the ways of coating the fastener include:

These are some of the things that you can do on your own once you buy the fasteners. There are other methods of protection against galling that can only be done during manufacturing. These include depositing chromium on the threads of the fastener, as well as through nitriding. To benefit from these treatments, you would need to specifically ask for them from the manufacturer.
Proper usage
In addition to that, it’s also important to use the fasteners in the manner they are intended to be used. For instance, using excessive force during tightening should be avoided, since it strips the threads off the fasteners and can lead to galling.
In summary, galling is a process that you might need to be aware of if you intend to use a large number of fasteners in a commercial setting. By minimizing the risk of it happening, you can reduce the need to spend money on replacing damaged fasteners.