During the process of construction, it is usually necessary to use fasteners in concrete. The selection of the wrong type of fastener and not putting them in place correctly usually leads to early failure of the fastener. This not only puts the structure in jeopardy, but also increases the chances of injury and financial loss. When choosing to use concrete fasteners for both domestic and commercial purposes, it’s important to have a clear understanding of what you can use and how you should use it for maximum effect. 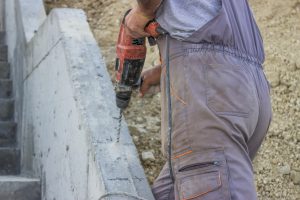 How old is the concrete?
The age of the concrete has a huge role to play in determining whether the fasteners will hold or not. As a general rule, one should not drill into concrete that is green, which is to say 28 days or less since it was put in place. However, it’s also important to note that as the concrete grows older, it tends to get harder and this makes it more difficult to drill into. It is for this reason that fasteners specifically meant for use in concrete (such as the 316 stainless steel grooved pin) should be used in such settings. Any other type is likely to fail.
Consider shock loading values
It is important to consider shock loading variables when choosing fasteners to be used in concrete. In fact, this is one aspect you can’t ignore if the concrete structure will be used for variable load bearing. A good example of this is a concrete ramp over which trucks will pass. Such a ramp will be exposed to very large forces in a periodic manner. If the fasteners used on it are not carefully selected and installed, they are likely to loosen due to the changing friction, and this will eventually lead to failure. Fasteners such as a 316 stainless steel hex lag bolt are likely to be the most ideal for use under such conditions.
Are there any chances of vibration?
If the concrete structure will be subjected to a lot of vibration, it could interfere with the fastener. It is common to find some of them coming loose after a few years or months of use. If vibration is expected, the fastener needs to be securely held in place. Ensuring that it’s a threaded one is advisable, since these tend to hold better compared to unthreaded ones.
What are the dynamics of the forces that it’s supposed to withstand?
Accurate calculations of the loading values need to be done to determine the best fastener to fit that application. If the fastener is likely to undergo tension (such as when connecting two segments of concrete that are being pulled apart), you would need to select a fastener made out of a material that specifically resists these forces. Otherwise, it will simply shear after some time.
Putting all these factors together takes time and requires intimate knowledge of the physical properties of both concrete and the fasteners. However, once they are accounted for, the resultant building is likely to be extremely reliable.